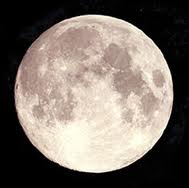 The Full Moon tonight is the HARVEST MOON.
Check out our "Celestial" collage sheet HERE (second row down).

The Harvest Moon is the moon closest to the Autumn Equinox (the first day of Fall, when the day and night are exactly the same length), which this year is on Sunday, September 22.  The next full moon, usually in October, is named the Hunter's Moon.

The Harvest Moon and Hunter's Moon appear larger and brighter to some people, but they're really not. This time of year there is no long period of darkness between sunset and moonrise of the full moon, so the night seems brighter than usual. This allowed farmers to stay out and work in their fields by moonlight under the Harvest Moon, and later, under the Hunter's Moon, allowed hunters to see the deer and other animals that came out to browse in the then-harvested fields.
Go out and dance under the big bright moon!

What is a BLUE MOON? When there are two full moons during one month, the second one is called the Blue Moon.

FAIRY MOON? When there are two NEW moons (dark moons, or "moonless" nights) during one month, the second is called a Fairy Moon.
Posted by Karen Lunagirl