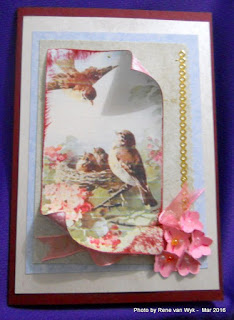 Time to find out which of the beautiful Spring Flowers & Birds entries won the challenge this month. And the lucky winner of the random drawing JUST got her entries in today shortly before the deadline! The winning entry is the next to last one, #26 by Rene CTgirl. Proof of the saying, "Better late than never"... Rene wins $15 store credit to buy digital images and/or digital collage sheets at Lunagirl.com!

Congratulations, Rene. I know you'll find something new to play with at Lunagirl Images. Email me when you get a chance, to claim your prize!

And congratulations to everyone who entered for some beautiful work to celebrate Springtime. Come back tomorrow for my April challenge ~ Cowgirls Cowboys and Horses. I have quite a few "Avril" postcards that feature people holding fish! Little girls, ladies, even couples with big fish. What's with the fish on these old French cards?

In France, the victim of an April Fool's Day prank is called a "poisson d'avril," an April fish (which refers to a young fish easily caught!) But that's not the whole explanation...

April is named for Aphrodite, the Greek goddess of love, beauty and fertility. The fish is one symbol of Aphrodite, who was born of the sea. While she is called the Love goddess, her domain is more accurately described as the sensual passion and romantic attraction that draws couples together. She doesn't care if it makes good sense or ruins your life, she just wants you to hook up! Think how sly Aphrodite uses desire and passion to "trick" creatures into love or at least lust and fertility and thereafter a lot of work and trouble! Nothing can make a fool out of you faster than love and lust. In the Greek myths Aphrodite is one capricious and "tricky" goddess.

For many centuries, in many cultures, this time of year has been associated with celebrations of frivolity, lightheartedness, and sometimes pranks. (The Romans had a festival called Hilaria around the end of March.) The coming of spring after the long months of winter brings out our pent-up energy and silliness, and we need a day to let it out! Spring fever, I know it well. Spring is also when Aphrodite goes wild in nature, as birds and bees get busy :-)

April 1 was the beginning of the New Year in some places in old Europe (right around the beginning of Spring), and that transition day from the old year to the new was frequently a time when the usual rules didn't apply and the world went topsy-turvy. Much of the tomfoolery associated with April Fool's Day could be attributed to this. Ancient customs allowed a few days when people could break the rules and get a little crazy, maybe to let off steam. Pretty wise, if you ask me.

This year April Fool's Day falls on a Friday, which makes it extra powerful! Because Friday is named for Freya, the Norse goddess of fertility who is another face of Aphrodite. Enjoy a little "Spring Fever" tomorrow!

"The first of April is the day we remember what we are the other 364 days of the year."- Mark Twain 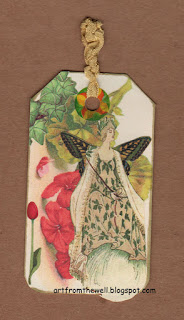 The beautiful flowers and birds keep coming in for my Spring Flowers and Birds challenge! I hope you will link up your entry by the end of March, so we can see your wonderful creations and also so you will have a chance to win the random drawing for $15 credit to buy images/collage sheets at Lunagirl.com!

In the meantime, here are two sweet tags by Michele Storms , featuring fairies and flowers, to help inspire you and brighten your day. 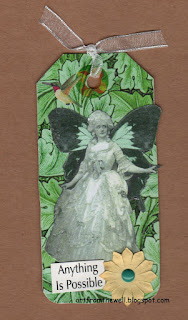 March has 31 days... There's still plenty of time to enter our March challenge!

Spring Flowers & Birds is our theme ~ a celebration of life and rebirth and hope, and warmth and sunshine and rain showers, and just general joy and happiness! 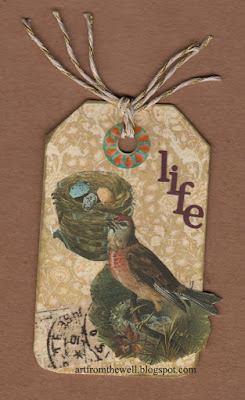 Flower blossoms and birds always bring me joy and make me smile... And bird's eggs have always been a symbol of rebirth and renewal in Springtime.

Here Michele Storms has including some tiny colorful eggs in a nest on this tag celebrating life. :-) 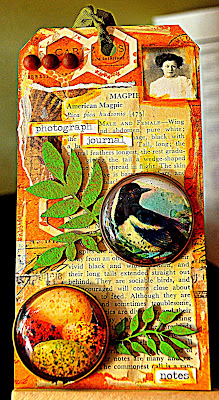 Show your interpretations and inspirations from the theme SPRING FLOWERS & BIRDS!  The challenge continues until the 31st, which is Thursday, and a winning entry chosen by random drawing will receive $15 credit to spend at Lunagirl.com!
Posted by Karen Lunagirl No comments:

You still have plenty of time to enter my "Spring Flowers and Birds" challenge for March!

For inspiration, see the charming entries so far and these beautiful creations by the Design Team... and look out your window for any signs of Spring!


How can it be Week Three already of my March challenge... We started on a Tuesday, maybe that's why it seems such a short time!

Anyway... My March challenge theme is "Spring Flowers and Birds." I hope maybe you're seeing some signs of Spring wherever you are, in the Northern Hemisphere at least.

I live in the Southern US where the winters are fairly mild and Springtime comes pretty early, before the "official" date. We already have daffodils, crocuses, violets, pansies, even some fruit trees blooming and little red buds on the maple trees... and plenty of birds that make a wonderful racket every day. There was a hard rain this morning, and I saw a wet robin hopping around the backyard like 'no big deal.' Then the sun came out, making sparkles on all the wet grass and warming up the floor in front of my glass door.

Here is some more lovely inspiration for the challenge from members of the Lunagirl Design Team. Their pieces are beautiful and imaginative as always! I hope they help to get your creativity flowing.

The way the days/weeks work out in March this year, this challenge will actually have five weeks. I hope you will enter... Any kind of flowers or birds, the messengers of Spring... any kind of craft project is welcome. You can see the guidelines and the entries so far here!

Enter up to three times, for your chance to win some store credit at Lunagirl.com! 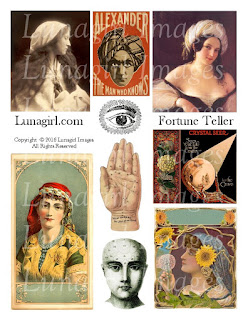 New digital collage sheet using some gypsy/fortuneteller images I've found. I've been meaning to use a couple of these for a long time. Hope you like it!

Click on the image to see it larger in my Lunagirl etsy shop where it is for sale.
Posted by Karen Lunagirl 2 comments:


Starting the second week of my March challenge. The theme is Spring Flowers & Birds, and the Design Team has some beautiful birds to inspire you this week!

Spring comes early here in the Southern U.S. ~ There are yellow daffodils blooming all over my town, so cheerful and hopeful, and brilliant purple crocuses my front doorstep. The birds know that Spring is coming ~ the yard is full of robins, sparrows, finches, chickadees, every day!

If you don't yet have the early signs of Springtime where you are... I hope this challenge will fill you with anticipation that it's just around the corner! (For everyone in the Northern hemisphere... not for our friends Down Under who are looking forward to Autumn, I suppose.)

Enjoy, and join in the challenge by linking up your flowers and birds! 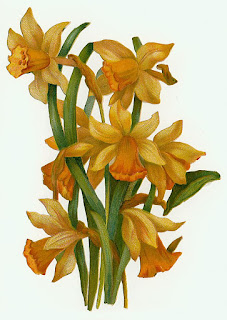 For oft, when on my couch I lie
In vacant or in pensive mood,
They flash upon that inward eye
Which is the bliss of solitude;
And then my heart with pleasure fills,
And dances with the daffodils.
Posted by Karen Lunagirl No comments:

For our "Spring Flowers and Birds" challenge... Chickens are birds, too! Here Michele Storms has used some Lunagirl chickens and swirly curly stamps to create these wonderful tag.

Find some flowers, bring out some birds, and join the March challenge!
Posted by Karen Lunagirl No comments: 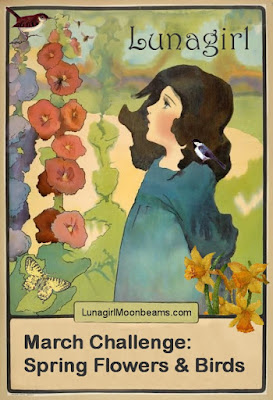 Welcome to my March challenge!

The first daffodil is about to bloom outside my front door, and there have been hints of springtime in the last few days, so this theme is just in time: Spring Flowers & Birds.

I couldn't resist using one of the images from my new "Garden Catalogues" collage sheet ~ adding some birds and changing the text of course. I think those are hollyhocks, which are probably summer flowers (and wonderfully old-fashioned) but I also added some yellow daffodils, which are definitely the messengers of early Spring!

I hope you have fun with this theme. It makes me smile.