The Moon in June 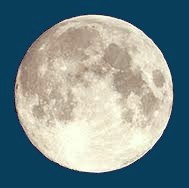 You may have heard that tonight's full moon is a "Supermoon."  That's a fairly new term for what astronomers call a perigee moon ~ the moon's "perigee" is the closest point to earth in the moon's orbit.  When the moon's perigee (closest point) coincides with a full moon, which it does about once a year, you get a full moon that can appear somewhat bigger and brighter than usual.

Did you know all the Full Moons (in each month of the year) have names in many cultures?  The full moon in June was the Strawberry Moon for Algonquin Native American groups and Ripe Berry Moon for the Dakotah, as it was a signal to look for ripening fruit.  The Cherokee called it the Green Corn Moon.  In Europe it was sometimes called the Full Rose Moon.  All of those are still appropriate here in Tennessee.

And why is June traditionally the month for weddings?  Because it is named for Juno, the Roman goddess of wives and marriage.  Happy full moon, from a June bride!