You may recognize Lily Elsie as one of our very favorite "Lunagirl" ladies ~ in fact, the lady in our blog banner. She is certainly one of the most beautiful women in our photo postcard collection, and was a prolific and talented actress in Edwardian musical comedies.

She was born Elsie Hodder in 1886 in West Yorkshire, England, the daughter of a dress-maker who operated a lodging-house. When her mother married theater worker William Thomas Cotton in 1891, Elsie became Elsie Cotton.

Despite being painfully shy, "Little Elsie" was a star in the British theater from early childhood, landing title roles on the London stage by age 10. By age 20 she had,appeared in 14 shows. Her anxiety and stage fright combined with the heavy touring schedule she adopted from an early age would lead to bouts of exhaustion throughout her life. From about 1900, she adopted the stage name "Lily Elsie".

Elsie acted in several Edwardian musical comedies before her great success in "The Merry Widow," opening in 1907. "The Merry Widow" was a huge hit, making Miss Lily Elsie a star (and launching a fad for the plumed hats she wore in the play!) Elsie appeared in another 16 shows, garnering continuous praise. One critic wrote "...it gave great pleasure merely to see her walk across the stage."

Admired for her beauty and charm, Elsie became one of the most photographed women of Edwardian times. Her image was much in demand by advertisers and for postcards. An Atlanta newspaper wrote, "Everyone agrees that Lily Elsie has the most kissable mouth in all England." The famous costume designer Lucile described her as "a girl who had both beauty and intelligence."

Elsie married the son of a wealthy textile merchant and left the stage, exhausted. She returned in 1916 and 1917 but then retired again, this time to the English countryside. She was easily stressed by touring, but starred in new productions in the late 1920s, always to good reviews. She also had small roles in two early motion pictures. 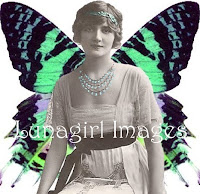 Unfortunately her marriage was unhappy and ended in 1930. She became reclusive and suffered from various ailments both physical and psychological through much of the rest of her life, and died in 1962 at age 76 in London.  A lovely, talented, and sensitive lady with such pretty eyes ~ we hope she experienced joy as well as sadness in her life.
Posted by Karen Lunagirl