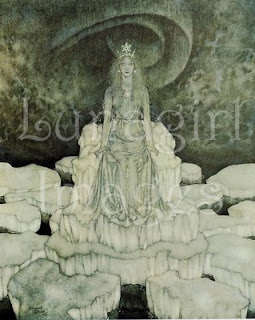 Today is the birthday of Hans Christian Andersen, the author of so many beloved fairy tales. While he did adapt folktales, many of his best-known stories are actually original works, including "The Snow Queen," "The Emperor's New Clothes," "The Little Mermaid," and "The Ugly Duckling" which is somewhat autobiographical.

Andersen grew up in poverty and suffered much in childhood from "not fitting in." However, he was an imaginative and intelligent child and was fortunate to have parents who indulged his love of literature and a grandmother who told him stories. He built a toy-theater and spent many hours creating costumes for his puppets and reading, even memorizing entire Shakespeare plays and acting them out with puppets. After a short time working as an actor and singer, Andersen began writing. His novels and fairy tales made him an instant success, and by his death at age 70 he was famous throughout Europe. As a child I loved these stories, especially "The Little Mermaid," which I must have read a hundred times. If you've seen only the cartoon movie and never read the story, it is much different. The original story is a haunting tale, and while the ending is hopeful it's also melancholy, hardly the traditional "happy ending"! The sadness was one thing that I loved about The Little Mermaid (although my favorite part was imagining the undersea kingdom!)

If you ever go to Denmark, see the statue of the Little Mermaid overlooking the harbor in Copenhagen. H.C. Andersen's birthday is also International Children's Book Day, so enjoy a storybook today! 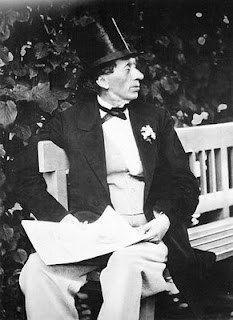