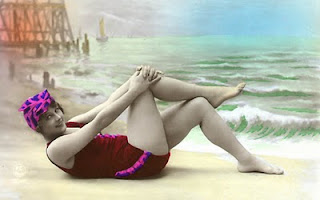 So my free image day seems to have migrated from Monday to Thursday. Maybe I can get it back to "Moon-day" but for now here is a cute flapper bathing beauty!
Posted by Karen Lunagirl No comments: 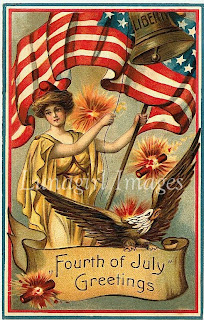 Did you know that the Continental Congress actually declared independence on JULY SECOND 1776?
John Adams predicted that the 2nd of July would be celebrated by Americans forever after!

July 4th, 1776, is the date that the Declaration of Independence was officially approved by the Congress, and the dates just got combined over time. The Fourth of July became a popular American holiday after the War of 1812, when patriotism swept the young nation. (I've been reading early American History lately!)

In times past, communities would read the Declaration of Independence in the town square, in addition to celebrating with fireworks and parades.

Here are a couple of our favorite Fourth of July postcards. Click on them to see details of our Victorian Holidays Volume Three collection on CD, with pictures for Halloween, Thanksgiving, and Birthdays as well as patriotic occasions (even some French patriotic cards for Bastille Day!) 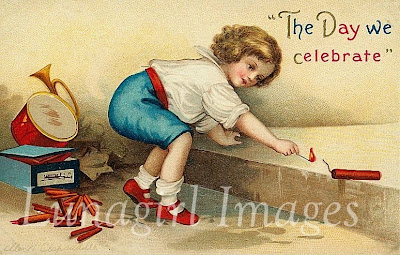