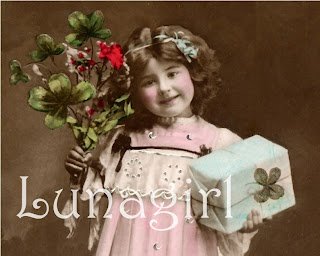 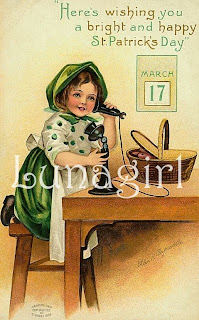 Another, more tragic muse for Dante Gabriel Rossetti was his wife, Elizabeth Siddal. She was the model for many of Rossetti's early paintings, the model for Millais's Ophelia, and also a painter and poet herself. Although her family was neither wealthy nor educated, she learned to read and write and began a love of poetry after finding a Tennyson poem on a scrap of newspaper that had been used to wrap butter!

After Dante Gabriel Rossetti met "Lizzie," she became the model for all his paintings of women and stopped posing for the other PreRaphaelites. They fell in love and became engaged, but Rossetti, who feared his family's disapproval of Lizzie's working class background, repeatedly postponed the wedding. Their engagement lasted for over ten years, during which Lizzie became increasing depressed and frail.

They finally married, and honeymooned in France. However, Lizzie remained ill and had become addicted to laudanum (an opiate that was legal at the time and used by many Victorian-era women as an "elixir"). She became pregnant but the child was stillborn. She overdosed on laudanum shortly after a second pregnancy ~ whether her death was accidental or a suicide is not clear.

Dante Gabriel Rossetti mourned her loss deeply, and buried his journal containing the only copies of many of his poems with her, tucked into her long red hair. The journal was later recovered from her coffin and the poems published ~ something which haunted him the rest of his life.

Rossetti adored and idealized Elizabeth Siddal in his paintings and writings. It is difficult and dangerous to pass judgment on another person's love, but perhaps if he had seen her more as a real woman ~ rather than as an idealized medieval maiden or, at the other end of the spectrum, the working class girl his family scorned ~ they could have been happier.

Christina Rossetti (who was Dante's sister) wrote about his idealized love of Lizzie in the poem "In an Artist's Studio":

One face looks out from all his canvases,
One selfsame figure sits or walks or leans:
We found her hidden just behind those screens,
That mirror gave back all her loveliness.
A queen in opal or in ruby dress,
A nameless girl in freshest summer-greens,
A saint, an angel -- every canvas means
The same one meaning, neither more nor less.
He feeds upon her face by day and night,
And she with true kind eyes looks back on him,
Fair as the moon and joyful as the light:
Not wan with waiting, not with sorrow dim;
Not as she is, but was when hope shone bright;
Not as she is, but as she fills his dream. 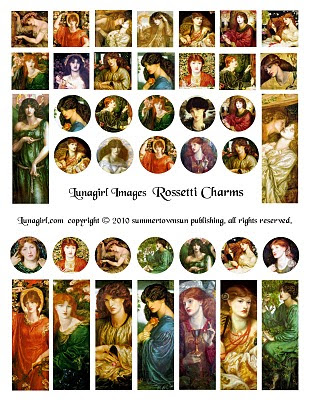 I can't believe it's March already! Here is a new collage sheet featuring women from paintings by Dante Gabriel Rossetti, one of the best-loved Pre-Raphaelite artists. These gorgeous, richly colored images are already sized in 1-inch circles and squares and 1x3" microscope slides, perfect for charms, pendants and other jewelry. Also nice if you just like some small images to embellish your altered art cards and crafts. Purchase and download "Rossetti Charms" and other Lunagirl collage sheets here: http://www.lunagirl.com/W-Lunagirl-Collage-Sheets-MINIS-microslides.htm

The face in most of these paintings is that of Jane Burden Morris. Jane was the daughter of an English stableman and a housemaid, and grew up in poverty with very little education. Rossetti and fellow PreRaphaelite Burne-Jones "discovered" her while she was attending a theater performance.

She was model and muse for Dante Gabriel Rossetti and William Morris (whom she married). After her engagement to William Morris, Jane obtained a private classical education and basically reinvented herself. She was highly intelligent, a voracious reader and accomplished student of languages and music, and moved with ease and grace among artists, philosophers, political activists, and the upper classes. She and Morris lived an artistic, bohemian lifestyle at Kelmscott Manor in the Cotswolds. She may have been Rossetti's lover as well.

You'll find some interesting information about Rossetti and his work at this website by the Walker Art Gallery: http://www.liverpoolmuseums.org.uk/walker/exhibitions/rossetti/works/
Posted by Karen Lunagirl No comments: