Le Quatorze Juillet (the 14th of July) commemorates the successful storming of the Bastille fortress in 1789 by French citizen-soldiers and revolutionaries.

The people of , fearing an attack by the French royal military, attacked the Bastille in search of ammunition. The Bastille was a symbol of the oppressive rule of the aristocracy, because the king used the Bastille as a prison to hold people indefinitely without trial or appeal.

.
While the French aristocracy enjoyed fabulous wealth and power, common people experienced increasing difficulty supporting themselves and their families, and writers who dared to criticize the government were jailed.

We like to identify with the elegance of the French aristocratic ladies, but the fact is most of us would have had more in common with the citizens of and the French countryside.

One of the first protests beginning the French Revolution was led by mothers who had no bread to feed their families.
A famous story (probably fiction) says that Marie Antoinette, sheltered in her world of fancy parties and powdered wigs, asked why the common people were angry. When told, “Because they are starving and have no bread,” she is said to have replied, “Well then let them eat cake.” A remark quite witty and amusing to her rich friends, but not so funny to the hungry Parisian commoners!

Marie Antoinette was a fashionable and influential woman but apparently not a very nice queen. Although she was popular at first, her sometimes arrogant behavior and extravagant lifestyle contributed to the decline of the French monarchy. As a footnote, this woman who is often considered the epitome of 'Frenchness' was actually an Austrian princess! 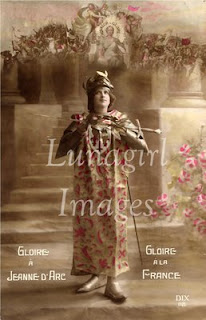 We have a lovely small collection of authentic French patriotic cards on our Holidays CD #3. They were printed during World War I, when was again in struggle. They show symbols of including the tricolor flag and Joan of Arc, as well as French soldiers and women, with slogans that speak of faith and hope.

If you can’t get to , they also celebrate Le Quatorze Juillet in the French Quarter in !
Posted by Karen Lunagirl